There were LOTS of nods to Andy Weatherall, legend deejay responsible for so many of the tracks we danced to in the 90s and more. RIP Andy…

12. Magazine – The Light Pours Out Of Me

18. William Onyeabor – When The Going Is Smooth and Good

19. Jacques Renault – Pianos On The Beach

29. Shocking Blue – Send Me A Postcard

@NewtownRecordFair is your monthly record fair in the heart of Newtown.

Each month features local vinyl record sellers with over 20,000 new and secondhand vinyl for sale, vinyl only deejays, a full craft beer bar, yummy restaurant and dog/kid friendly surrounds. What’s not to love? Oh and it’s always free entry.
From 11am-4pm in the back beer garden of the Bank Hotel 🏨 – see you there!

Another one bites the dust! George Michael was a flawed diamond but man did he give his all. Born in 1963, allegedly he has died just today, 25 December 2016, he was known for these three things:

And we LOVE him for all of them. Before you cast aspersions, just remember that this guy sold more than 80 MILLION albums in his time. That deserves big kudos.

Fantastic, the bands’ first album, was released in 1983 and includes Club Tropicana (below via Vevo), Young Guns and Wham Rap! It went No. 1 and had multiple top ten hits. Imagine this happening to you as a teenager?

Their second album, Make It Big, went No. 1 on the US charts, including No. 1 hits Wake me Up Before You Go Go, Freedom.

In his copious amounts of spare time (not), George also contributed background vocals to David Cassidy’s The Last Kiss (1985) and Elton John’s Nikita and Wrap Her Up (1985).

Although Careless Whisper was his first solo hit (1984), this was released during his time with Wham. Post-Wham, his first biggie was a duet with Aretha Franklin I Knew You Were Waiting. His effortless (well, that’s how it appeared to us the punters) collab with other huge global stars was another angle on his ability to not take himself too seriously, when millions were doing the exact opposite.

He won a Grammy for this one with Aretha.

In 1987 Faith was released, with George writing and producing every track on the album. I Want Your Sex was the lead track from this album but I honestly feel that every track from this album is worthy of exploration. I Want Your Sex is not about casual sex (George’s words), but not everyone else thought so. When introducing the song on American Top 40, host Casey Kasem, referred to it as “the new single by George Michael”. Go George! His creative work is really only an expression of his desire – how everyone else took it is up to them.

I Want Your Sex – such a strong, directional song! 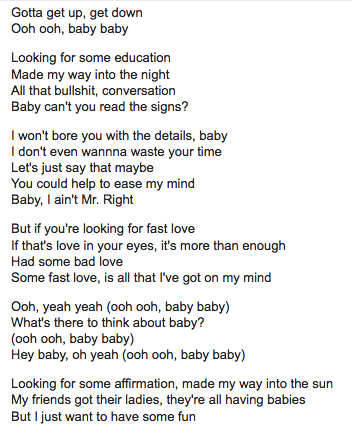 George’s sexuality was a matter for himself of course, but his public journey to his own awareness of his sexuality was something that we watched from the media circus. How would you have managed coming out from one of the most successful 80s outfits?

I have no idea how I could have done what he did, and the more he got into trouble with the law (engaging in lewd acts in Cali loos with policemen, 1998, arrested for possession of dope, 2006), the more I liked him.

You see, George is only human. He has foibles like the rest of us and I would only hope that I had the grace and humour to take the piss outta myself if that ever happened to me.

Rest In Peace George, you have done a fantastic job and lived your life on your own terms.

My Vinyl Revolution is passionately committed to sharing vinyl and music stories in our online community and beyond. If you have a blog that you would like to share, please forward to us and we will either repost or paraphrase as you like.

Saving the World, One Record at a Time.


Hi Everyone! My Vinyl Revolution here, blogging about vinyl cover art and the artists, designers and sometimes even the musicians who make them an art form.

Electronic musicians and Kraftwerk fans should prick up their ears for this blog article. Organisation were a German Krautrock band with three (future) members of Kraftwerk making experimental bleeps and twaddles. Don’t get me wrong, I like this album but more for the vinyl art than the music