Grace Jones released her Island Life ’85 compilation album via Island Records. A very 70s Eurodisco sounding release, it has become a classic of the pop/reggae/electro genres, and includes classic tracks such as La Vie En Rose , Slave To The Rhythm, My Jamaican Guy and Pull Up To The Bumper.

The Island Life Vinyl Cover Art is, however, the focus of this blog article. We do love the music and Grace herself, but it is the cult of attraction to the visual side of the album that fascinates us. MTV music channel and video formats were a new medium at the time, and the need for 24/7 content was only just in its’ nascent phase. Jones’ striking visual appearance and performance style were a perfect match for video television.

The Island Life cover creative imagery was composed by Jean Paul Goude, using a composite of imagery to make an impossible arabesque the key visual focus of the cover. In the shot, Grace is just touching her right foot with her twisted left arm. Her right arm is extended, holding a microphone with lead extending out to the right of the frame.
She wears a red bandeau and red leg warmer on her left knee and thigh together with a blue and white spotted legwarmer on her lower calf and ankle. And that’s it, unless you include the shiny, shiny oil all over her perfectly proportioned body!
The background of the photograph is intentionally simple – sky blue wall with wooden floor and mat to make Graces’ left foot pop.

He notes about that picture that:

“…unless you are extraordinarily supple, you cannot do this arabesque. The main point is that Grace couldn’t do it, and that’s the basis of my entire work: creating a credible illusion.”

We don’t think that any human could sustain a pose like this, but because it is shot to look like a natural pose, it gives the impression that Jones is doing it. Clever, right? 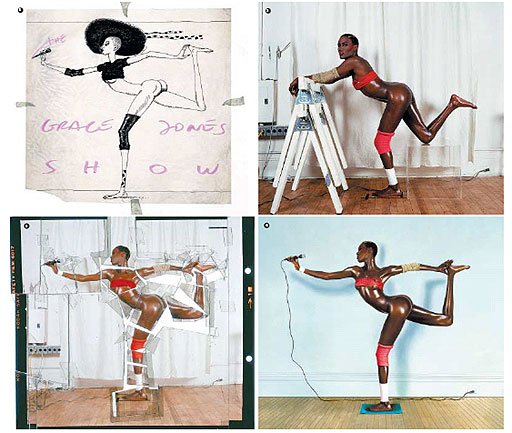 The concept visuals are below, showing how it was made. It looks easy enough to do from todays’ perspective, but remembering that Photoshop didn’t appear for another 5 or so years, it is actually very masterful manipulation of both the pose to trick the eye AND the finishing of the photography to make it look as natural as it does.

The typography is at the top of the record, which is sensible so browsers can see it immediately on flicking through records in a crate. We wish more design could be like this…

Since then, many have tried to buy into the iconic imagery of Graces’ album. This is a definite sign of success, as well as a sincere appropriation of the creative concept. 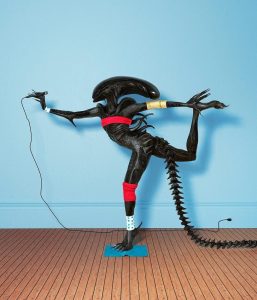 In 2016 MoAD put together the exhibition that we all want to: The Grace Jones Project. Excerpt from their archive page:

“The Grace Jones Project explores the influence of model, actress, and singer Grace Jones. The exhibition brings together more than twenty works by an inter-generational group of artists working primarily in photography, video, and performance. Some artists pay direct tribute to Jones while others demonstrate a Jones-like sensibility in their engagement with the black body and queer identity.” 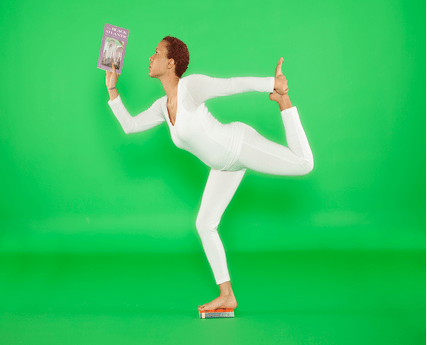 But it gets better than fine art – in this blog appropriated Island Life imagery is reworked using the artists’ different body shape (left), then Grace, then a Lego inperpretation!

And then there are the celebrity interpretations of the pose:

Seattle Seahawks wide receiver Caleb Scott does an admirable job of balancing on a lightbox with a wide grin in Graces’ pose! 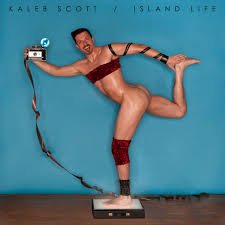 Miss USA 1993 (also American actress, model, producer, author, television personality, and entrepreneur, Bravo series The Real Housewives of Atlanta from 2012-2018 and The Celebrity Apprentice 7 in 2015) does it with a boxing glove and orange towel…

Grace is clearly the winner in this article (if there was ever a comparison to be made) but we love that everyone, especially those with access to software and too much time on their hands, is prepared to follow suit with the Island Life vinyl cover art.

Hipgnosis was a London design agency consisting primarily of Aubrey Powell and Storm Thorgerson who specialised in cover art design for twenty years from 1963-1983. Peter Christopherson (of Throbbing Gristle fame) joined in 1974 and became a full partner in 1978.

All different and amazingly talented designers, they exerted

I came across a recent purchase of Judas Priest’s Sin after Sin while browsing through the piles of vinyl sleeves that lie round our house (yes, in ordered piles and on shelves).

Metalheads love this sort of music, and I’m not sure where my taste lies yet in that regard, but I sure do LOVE the vinyl cover art by Ros?aw Szaybo (allegedly).

Sometimes referred to as packaging, sometimes art direction, the design skill that this artist employs is focussed, heavy and mythical!

I did some research (more than Wikipedia) and found out these FAQs about Ros?aw Szaybo and the album creation:


Hi Everyone! My Vinyl Revolution here, blogging about vinyl cover art and the artists, designers and sometimes even the musicians who make them an art form.

Electronic musicians and Kraftwerk fans should prick up their ears for this blog article. Organisation were a German Krautrock band with three (future) members of Kraftwerk making experimental bleeps and twaddles. Don’t get me wrong, I like this album but more for the vinyl art than the music

Mingering Mike – the story of a digger who found gold

How did a soul star, who released over 100 albums, just disappear? The story of Mingering Mike, whose career spanned from 1968-77, highlights the power of vinyl as art.

This story has all the elements of a good vinyl mystery:

…and here’s where you can find details of the exhibition at the Smithsonian American Art Museum: http://americanart.si.edu/exhibitions/archive/2015/mingering_mike/